Bizarre story: I was standing around one day when Oliver Stone’s son, Sean Stone, and Jean-Claude Van Damme’s daughter, Bianca Van Damme, and Alexander Wraith from Orange is the New Black, were about to have lunch when they looked over at me and were like, “You should be a John Travolta thug in our movie!”

And so, that is just what I became. It was so awesome working on the set of Enter the Fist and the Golden Fleecing. It’s an action comedy inspired by 1980’s action flicks with tons of really cool cameos …like Danny Trejo, Ernie Reyes Jr (yup!! One of my childhood favorites from Ninja Turtles!!!!) and a lot of pro-wrestlers and martial artists. 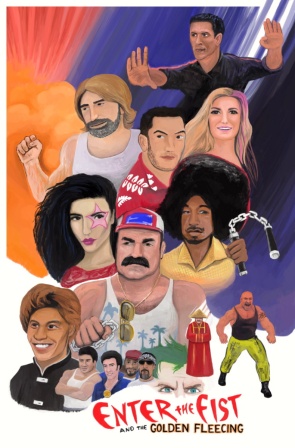 Taimak (yup again!!! The very same Taimak from the 1985 cult classic The Last Dragon) at one point enlisted me to reenact a fight scene from Bruce Lee’s Enter the Dragon. We were off-camera, in the patio outside the studio (afternoon sunshine gleaming all around) with a relatively small audience including stunt coordinator Pete Antico. Taimak, of course, played the part of Bruce Lee …and I was the guy getting beat up hahaha. But throughout the reenactment, Taimak described how this was more than just a fight. It was an emotional release. With each kick and punch, Bruce Lee’s character was in reality facing his fears and ultimately conquering the terrors of his past.

Perhaps one of the most surreal moments happened after I filmed a scene and got a few laughs – playing up the 1980s action comedy theme – Michael Dudikoff (the dude from the American Ninja movies that I watched as a kid!!!!!) came up to me, shook my hand, and said, “It was wonderful working with you!”

As a visual artist, I was so inspired by my experience that I ended up creating a movie poster. This artwork can now be seen on the IMDb page for Enter the Fist, with many the actors tagged in it (me included, Rey Marz as the Travolt Thug!!! I’m on the bottom row …the lead hair stylist, Leesa Simone, did a great job puffing up my hairdo like Saturday Night Fever)

Be sure to check it out!

This entry was posted on Monday, September 19th, 2016 at 10:03 pm and is filed under Movie Reviews. You can follow any responses to this entry through the RSS 2.0 feed. You can leave a response, or trackback from your own site.